The historic dress factory building was completely renovated by NeighborWorks of Western Vermont in 2004.

The History of NeighborWorks of Western Vermont

The Neighborhood Housing Services model goes back to a 1968 resident-led campaign for better housing in Pittsburgh, Pennsylvania. Dorothy Mae Richardson, a homemaker and community activist, did not want her neighborhood razed for “urban renewal.” She enlisted city bankers and government officials to join with her block club to improve her neighborhood and allow residents to stay in their homes. 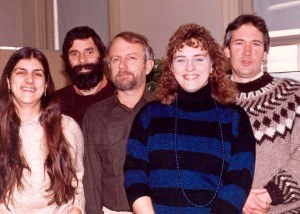 Together they persuaded 16 financial institutions to make conventional loans in the community and a local foundation capitalized a revolving loan fund. They rented a trailer, hired staff, and named the effort Neighborhood Housing Services.

NeighborWorks of Western Vermont started in 1986 as Rutland West Neighborhood Housing Services, a consortium of four towns: Rutland, West Rutland, Castleton and Fair Haven with the intent of stabilizing four deteriorating neighborhoods in those towns by providing low-interest loans for home repairs to homeowners.

The focus of our program was to make health and safety, structural and energy efficient repairs affordable for homeowners in the four neighborhoods. The improvements in the “target” neighborhoods would inspire investment throughout each town.

Funding and technical support for starting the program came from Neighborhood Reinvestment Corporation (now NeighborWorks America) and from the Vermont Community Development Program. Today, both agencies are still the principal supporters for NeighborWorks of Western Vermont’s home repair program.

Our service area expanded slowly in the early years to cover eventually all of Rutland, Addison and Bennington counties.

Our first target neighborhoods in 1986

The Neighborhood Housing Services model called for Neighborhood Committees to be organized to help residents deal with local issues.

In Rutland’s northwest neighborhood, our committee was instrumental in the adoption of an ordinance to divert large trucks off some of the smaller streets and in the development of a park on a trashed, vacant lot. West Rutland saw the revitalization, reinvestment and cleanup of Marble Street. Castleton improved the Hydeville strip, and the Fair Haven committee developed a park/playground on the south side of town.

To this day, we manage neighborhood projects for NeighborWorks Week such as paint-ups, community gardens, green-ups, etc., a carry-over from the early years.

In 1987, Julia Redington became our first homeownership success, purchasing a house on Grove Street in Rutland. Julia was the first of hundreds of homebuyers to come through NeighborWorks of Western Vermont. The program evolved into what is now the Homeownership Center. Educating homebuyers was seen as the key to homeownership.

We became a chartered—and the first rural—member of the national NeighborWorks America network in 1993.

Throughout the years, the one thing that has remained most consistent is the dedicated Board and Staff who keep the organization going. We have always been made up of people who care about helping people – that is the message that has always come through, and that has been the true key to success.

Are you interested in talking with a NeighborWorks of Western Vermont representative about homeownership, education, lending, home repair, or home energy efficiency? Contact us!

Donate to NeighborWorks of Western Vermont

“I do feel like this is a good start for us. I look forward to meeting with Nancy and learning even more. Thank you!”

"Now, my house is safer and warmer than ever! Thank you NeighborWorks for being available, affordable and always professional."

“This is a great class with a lot of valuable information. I am very thankful for the flash drive as I want to keep learning and I would never have been able to write all [the information] from the class down. Thank you Nancy! Great job!”

"A phone call and a meeting was the beginning of a wonderful relationship with professionals in every aspect of the process. Starting with a loan I could really afford, all my questions answered quickly and explained in a way I could understand. A well deserved big thumbs up from this client!"

“Dear Gregg, It occurred to me the other day that I never formally thanked you for everything you’ve done for my family. THANK YOU!! The struggle to get by is not so overwhelming anymore thanks to you.”

"When I noticed the rupture in the foundation, I had to go through the “crisis piece”- what am I going to do!- for about three days, and then I said, wait a minute, NeighborWorks! I knew you guys were the right ones to call."

"I took Homebuyer Education because I felt like I needed a little more information about the process to feel confident and to be able to talk to lenders and know what they were talking about."

"I was renting a great apartment and landlords here in Rutland but I was getting frustrated that I was essentially paying for their kids to go to college, and I have my own student loans. I am now paying about the same, and making an investment in my future."

“Very informative. I will continue to recommend [this class] to our clients.”

“I learned that there is a lot of work and time going into buying a home. I’m a bit scared, but excited!”

“I had always dreamed of owning my own home but I really had no idea where to begin with the process... One of my friends told me about NeighborWorks so I got online and saw that they regularly hold a Home Buyer education class. The class was totally worth the time and the money. I

“Amanda was the most helpful, and we worked out a loan that was manageable for me and that covered the repairs that were absolutely necessary for my house- I have more on my list to tackle but these were the ones Ron helped me prioritize,”

“I’m hoping the worksheets will help me to better understand budgeting and saving.”

"My RealtyWorks Realtor Gene was really helpful because he pointed out a lot of things in the properties that were really helpful that I wouldn’t have noticed or thought to consider. He was amazing, every time I had a question, he had an answer- even at 11 at night!"

"Without NeighborWorks, I wouldn’t have known where to turn. I’m so appreciative."